Colleges and universities have succeeded in attracting more underrepresented-minority students, but that increased access for black and Hispanic students has been accompanied by increasing campus polarization on the basis of race and ethnicity, says a report released on Wednesday by Georgetown University's Center on Education and the Workforce.

The result, it says, is a system in which elite selective colleges enroll predominantly white students while black and Hispanic students, even high-achieving ones, largely attend open-access institutions. Because the latter group of colleges spends less on instruction and sees lower shares of students through to graduation, higher education has thus become a "passive agent" in perpetuating white privilege, says the report, "Separate and Unequal: How Higher Education Reinforces the Intergenerational Reproduction of White Racial Privilege."

"The postsecondary system mimics and magnifies the racial and ethnic inequality in educational preparation it inherits from the K-12 system and then projects this inequality into the labor market," the report says.

The implications of those enrollment patterns are profound, the report argues. Students who attend open-access institutions are less likely to complete their degrees on time and less likely to go on to earn graduate degrees, it says. Meanwhile, when African-American and Hispanic students do attend more-selective institutions, the results are dramatic, the report says: The students' earnings advantage, for instance, increases by 21 percent. Beyond Preparedness

Disparities in college attendance and outcomes by race are not explained away by differences in college preparation, the report argues. Each year, it notes, 111,000 African-American and Hispanic students graduate in the upper half of their high-school classes but don't finish college in the next eight years.

"Many African-Americans and Hispanics are unprepared for college," the report says, "but whites who are equally unprepared still get more postsecondary opportunities."

When high-achieving minority students go to open-access colleges, they are about half as likely to graduate as those who attend more-selective institutions, according to the report. 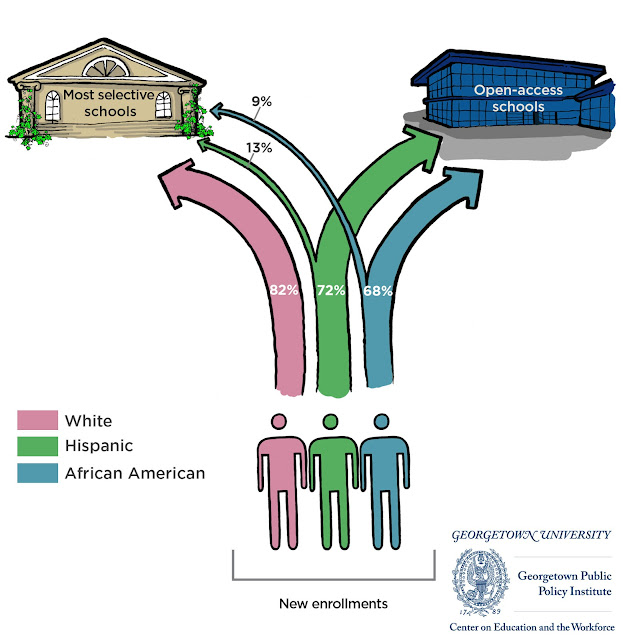 Students' college outcomes are often linked to socioeconomic factors, but those are not the whole picture, Anthony P. Carnevale, the Georgetown center's director and a co-author of the report, said in an interview. "Race is an added vulnerability that makes low income and low parental education and other variables more powerful," he said.

The report brings more attention to the "widening chasm" between elite colleges and underrepresented-minority students who are qualified but ultimately do not apply to or enroll in such institutions, said Brian K. Bridges, executive director of the Frederick D. Patterson Research Institute at UNCF, formerly the United Negro College Fund. He cited the Gates Millennium Scholars program, which awards grants to high-achieving minority students with significant financial need, as one model for opening up access to elite institutions. 'Cool Off the Arms Race' for Prestige

Researchers in economics and other fields have recently experimented with more outreach to low-income students, many of whom are members of minority groups. Interventions such as sending students text messages about tasks necessary to prepare for college or providing them with customized college information have been found to affect their choice of whether and where to enroll.

In terms of institutional strategies, elite colleges could take a cue from their open-access peers, said Deborah A. Santiago, co-founder and vice president for policy and research at Excelencia in Education, an advocacy group for Latino students. Instead of just relying on admissions events at local high schools and other venues, Ms. Santiago said, selective colleges could establish partnerships with "promotoras" in predominantly Hispanic communities or work more with churches and other organizations.

The report does not make policy recommendations, and Mr. Carnevale said he is not optimistic about a realistic short-term solution to stratification. Still, he offered a few suggestions, including greater rewards to "striving institutions and individuals."

Colleges need financial incentives to attract and graduate low-income minority students, and those students need more financial support, he said. Institutions, he said, should recognize those priorities and "cool off the arms race" for prestige.

Stratification has been apparent for decades and has only gotten worse, said Michael A. Olivas, director of the Institute of Higher Education Law and Governance at the University of Houston. He called for more examination of legislative and legal solutions, and greater attention to the plight of immigrant students.

Posted by Black Educator at 9:55 AM