Posted by Black Educator at 5:39 PM No comments:

Micheal Moore (of Farenheit 9/11, Bowling for columbine) has produced a powerful new documentary on the inhumane US healthcare system. It will have serious repercussions within the 2008 US Presidential campaign.

Staples Singers In Ghana 1971: "When Will We Get Paid"

Here's a classic and still timely tune by the Staples Singers.

Who said Black Reparations was a "new" idea/demand?

Our fight for Reparations is inseparable from our fight for Liberation... wherever we African People are!

Posted by Black Educator at 6:57 AM No comments:

Busing Version2 Also Does Not Work

NOTE: There are many things that I agree with Jonathan Kozol on. But, his notion of Busing Version2 is not going to make it. For the vast majority of Blackfolk in the US it was and is NOT about having our children sitting next to white kids in school. It was and is about physically going somewhere to receive EQUITY in Education: to have the same quality stuff white schools have... as our Human Right. A few Blackfolk (and Latinos) are so color-struck via racial inferiority that they believe that PROXIMITY with white kids will automatically bring excellent education to their children. We have learned from the 70's and 80's that busing does not work. Just the wear and tear on our children rising at 4 or 5 in the morning and trudging home at 5 or 6 in the evening almost cancels the alleged "quality" education they may be getting at this great white suburban school. In addition, these outlying schools- for the most part- are so Eurocentric that they help re-enforce inferiority complexes among children of color and racist stereotypes among white children and teachers. In these outlying "good schools" there are very few Black and Latino teachers who can help nurture self-confidence and racial consciousness within this vast sea of whiteness. The recent US Supreme Court Decision allows us to face the reality of the power of HOUSING SEGREGATION dictating the apartheid school system. Desegregating housing is a long multigenerational process... forcing us to face the fact- that in the meanwhile- we (parents, teachers, students, community and serious elected officials) have to transform our neighborhood schools into schools of excellence and not worry about the lack of white kids in the classroom. Afterall, the public schools in our neighborhoods are OUR tax dollars at work: so they better work correctly for US. ==========================================

Jonathan Kozol is the author of the forthcoming “Letters to a Young Teacher.”

LAST month’s Supreme Court ruling on school integration came as a blow to those who have been watching the gradual dismantling of Brown v. Board of Education with despair.

There is, however, some cause for hope. In his concurrence, Justice Anthony Kennedy opened up a new avenue for educational justice by contending that other methods of achieving integration — like revising school attendance zones — are constitutionally permissible so long as they do not sort and label individual children by race.

Congress has an opportunity to take advantage of the opening created by Justice Kennedy later this year when it reauthorizes the federal No Child Left Behind Act. The law gives children the right to transfer from a low-performing school to a high-performing school if the low-performing school has failed to demonstrate adequate improvement two years after being warned of its shortcomings.

Unfortunately, the transfer provision has until now been a bust. Less than 3 percent of eligible children have been able to transfer, in part because of the scarcity of space in high-performing schools within most urban districts. Although the law does not prohibit transfers between urban and suburban schools, it offers no inducements to the states to make this possible.

Democrats in the Senate should therefore introduce an amendment to authorize and make easier cross-district transfers — not on a specifically race-conscious basis, but solely to fulfill the professed intention of the law.

There is obvious urgency to this. At present, black children are more segregated in their public schools than at any time since 1968. In the inner-city schools I visit, minority children typically represent 95 percent to 99 percent of class enrollment. Not surprisingly, minority parents overwhelmingly support cross-district transfers. In the Boston area, for instance, 16,000 children — nearly one-third of all minority children in the city’s schools — are on the waiting list to transfer. (It is worth noting that of the children who participate in the Boston transfer program, 95 percent graduate from high school and nearly 90 percent go on to higher education.)

Senator Edward M. Kennedy, whose Education Committee will lead the way in reauthorizing the education law, should develop an amendment to promote cross-district transfers. The amendment should include the following provisions:

First, states should be required to ease transfers across district lines for children now in chronically low-performing schools.

Second, schools and districts must not be permitted to reject these students so long as they have space available in existing classrooms, which most suburban districts do.

Third, states must pay the added costs incurred by the receiving districts; they must not, however, compel hard-pressed urban schools to reimburse their wealthier suburban counterparts.

Fourth, states must pay for transportation.

Fifth, in order to ease the burden on states, Congress should create a federal fund to be used to underwrite some of the costs of complying with the law.

Sixth, Congress should enact specific fiscal penalties for states that drag their heels or defy the terms of this amendment altogether.

It would take considerable courage for Mr. Kennedy, who co-sponsored the unsuccessful transfer provision in its present form, to support this proposition. If he did, however, he could deal a mighty blow to resurgent racial concentration — without introducing racial terminology into the debate. For this opportunity, one that was perhaps bestowed unintentionally, we have Justice Anthony Kennedy to thank.

Jonathan Kozol is the author of the forthcoming “Letters to a Young Teacher.” 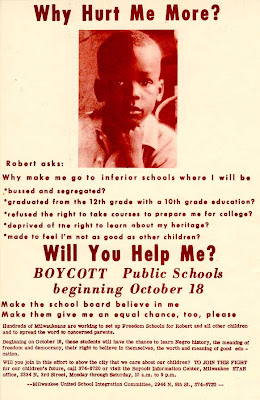