The protests that have roiled St. Louis since the acquittal last week of former St. Louis police officer Jason Stockley in the 2011 murder of Anthony Lamar Smith are—in one respect—animated by the palpable injustice of the case. The trial judge gave little weight to Stockley’s declaration, during his pursuit of Smith, that he was “going to kill this motherfucker.” He accepted without hesitation or reservation Stockley’s claim to be acting in self-defense. He whistled past strong circumstantial evidence that Stockley planted a weapon in Smith’s car after the shooting. He made little of chilling detail that Stockley, in addition to his service weapon, was brandishing a personal AK-47 in defiance of departmental regulations. And he punctuated his ruling with the gratuitous aside, on the question of whether Smith was armed, “that an urban heroin dealer not in possession of a firearm would be an anomaly.”

More broadly, the protests mark a persistent outrage at police conduct (and misconduct) in which the deaths of Smith in 2011, and of Michael Brown in 2014, are but the most visible episodes. And they mark a persistent burden of unequal citizenship in Greater St. Louis, in which African Americans are more likely to be the targets of local government than its beneficiaries. Policing, in this sense, is not just a public service aimed at securing safety and order. It is, as Joe Soss and Vesla Weaver underscore, a highly discretionary exercise of “coercion, containment, repression, surveillance, regulation, predation, discipline, and violence” that represents for many—and certainly for the most marginal—the single most important point of contact between citizen and state.

“The meting out of punishment in the American criminal justice system,” add Tracey Meares and Ben Justice, “. . . . provide Americans with a powerful and coherent set of messages and experiences that define who is a citizen, and who is a problem.”

These patterns have a long history, and are hardly unique to St. Louis. But they are magnified in this politically fragmented and deeply segregated metropolitan area. As of 2017, St. Louis County alone counts 89 municipalities, 81 municipal courts, and 61 police departments. Local testimony—from the 1970 hearings of the United States Commission on Civil Rights through the work of Arch City Defenders and others in the wake of Michael Brown’s death—document exposure to serial traffic stops and low level harassment from one municipal fragment to the next, and a tangle of local warrant and fines that often trapped those charged with even minor offenses on a “municipal shuffle” from one court docket to the next. And this “byzantine maze of overlapping jurisdictions,” as reporters Ryan J. Reilly and Rebecca Rivas put it, has made it harder to accomplish any meaningful change in policing or the courts; “whatever you do in St. Louis City,” one reformer observes, “you have to replicate 90 times throughout the county.”

Traffic stops are one potent illustration of the disproportionate contact between black citizens of Greater St. Louis and their local police. Since 2000, the State of Missouri has required local police departments to report traffic stops (and their outcome) by race. The figure below plots this disparity index for the nine-county St. Louis region, for blacks and whites, from 2000 to 2016. At a disparity index of “1,” the share of traffic stops matches that racial group’s share of the population. Each dot on the graph is a police jurisdiction; the bars show the range from the 25th to the 75th percentile, with the midpoint line designating the median value for that year across all jurisdictions. The “whiskers” extend to a point 1.5 times the interquartile range (the difference between the 25th and 75th percentiles); all values greater than that are excluded as outliers. 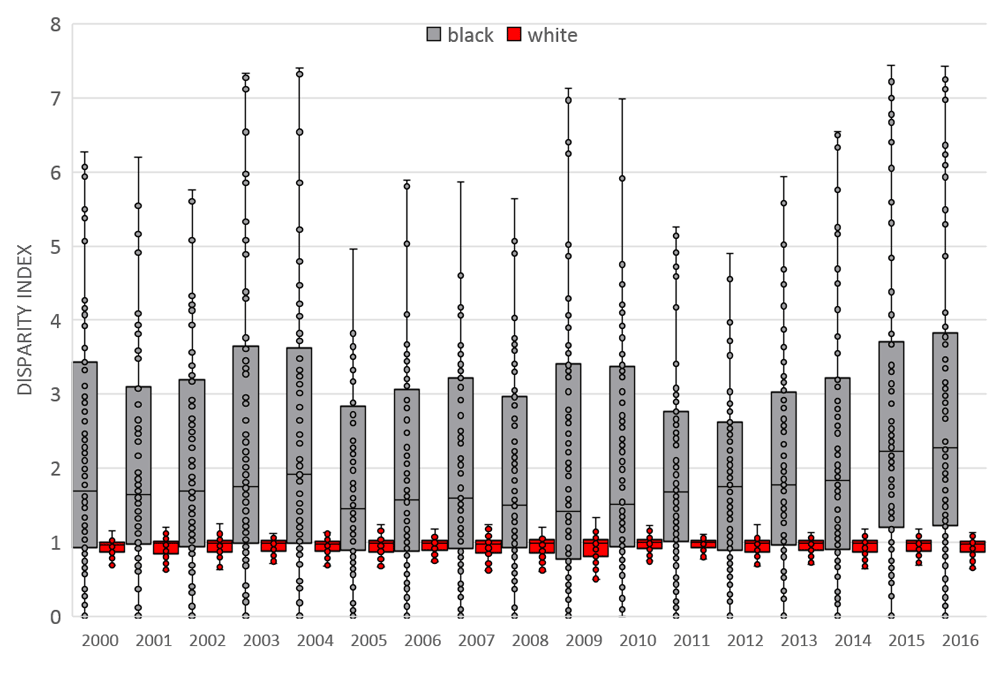 For whites, the 100-odd police jurisdictions in the St. Louis region are clustered at or below 1 in every year surveyed. For blacks, the median disparity index is closer to 2, and the 75th percentile is over 3 for all but four of the years surveyed. A quarter of these police jurisdictions, in other words, stopped black motorists at a rate more than three times their share of the population.

This data further corroborates the conclusions of the Obama Justice Department’s investigation of the Ferguson Police Department, published in 2015. In its report, the Department noted “the persistent exercise of discretion to the detriment of African Americans; the apparent consideration of race in assessing threat; and the historical opposition to having African Americans live in Ferguson, which lingers among some today” in describing local practices more interested in enforcing segregation than in ensuring public safety. The police “see some residents, especially those who live in Ferguson’s predominantly African-American neighborhoods, less as constituents to be protected than as potential offenders,” the report concluded caustically.

Such sharply uneven experiences diminish and devalue civic life in other ways. A criminal record can short-circuit other avenues of meaningful citizenship—including education and employment opportunities, access to housing, and the right to vote. Both the rate and the manner of interactions with the police, of which traffic stops offer but one jarring example, undermine the faith of African-American citizens in the ability of their government to make fair and objective decisions. 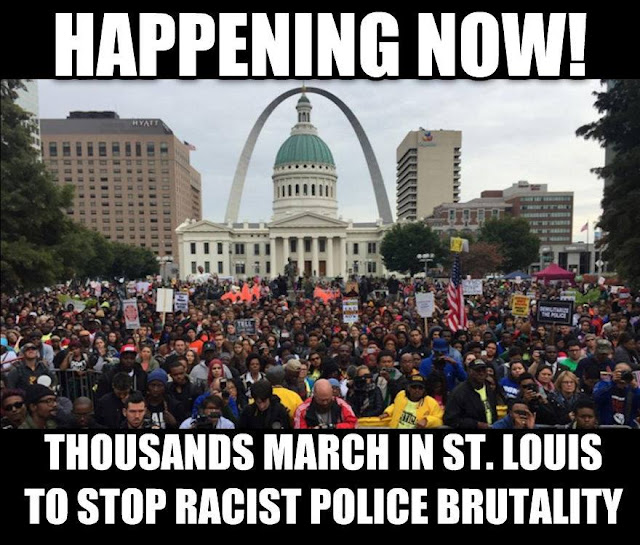 Such policing practices “arrest citizenship” not just because they are unevenly targeted, but because the conduct of the police, and the charges themselves, violate basic norms of social and legal equity. “African Americans’ views of [Ferguson Police Department],” as the Department of Justice observed, “are shaped not just by what FPD officers do, but by how they do it.”
The problem here is twofold: first, local policing in Greater St. Louis has always leaned heavily on enforcement of the municipal code—a constitutional fog of petty offenses and citations.

Michael Brown was stopped under the auspices of Ferguson Municipal Code Sec. 44-344 “Manner of walking along roadway,” an exhortation to use the sidewalk that was, before its repeal in 2016, employed almost exclusively as a pretext for stopping black pedestrians. More broadly, much of the harassment that passes for policing rest on “contempt of cop” charges such as Failure to Comply, Disorderly Conduct, Interference with Officer, or Resisting Arrest—all of which are wielded overwhelmingly against black pedestrians and motorists. The result, as the Department of Justice tallied, are systematic violations of the First Amendment, and of the “probable cause” and “excessive force” provisions of the Fourth Amendment.

Second, this pattern of unequal protection under the law is accompanied by only the thinnest veneer of procedural justice. Police interactions with African Americans in St. Louis and St. Louis County have historically been marked by indifference and neglect of those seeking the protection of the courts (including early arrivals in areas of racial transition), and disrespect, disdain, and excessive force for those who are the targets of the law. In their scathing 2015 assessment of the County’s municipal courts, Arch City Defenders underscored this point: “For most individuals, the only substantive interaction they have with the Missouri justice system or with their municipal government is through the municipal courts, and the impressions instilled by those courts reflect on the entire municipality.”

In short, police across the region have snuffed out any semblance of equal protection and equal citizenship for half the population of the City of St. Louis and nearly a quarter of the population of St. Louis County. This regime of policing, at once systemic and chaotic, is just one iteration of the refusal of equal citizenship playing out hour by hour across the country—in stark racial inequalities on every metric from school suspensions to executions, in pervasive entanglement with the police and courts in particular for young black men, and an in era of mass incarceration without historical precedent or current analog. These are the conditions that shield state actors no matter how egregious their conduct, and that extend to others the state’s constant attention but not its protection. These are the conditions that made it possible for Jason Stockley to murder Anthony Lamar Smith and walk away free.

Colin Gordon is a professor of history at the University of Iowa. He is the author of Mapping Decline: St. Louis and the Fate of the American City (2008) and a companion website.
Posted by Black Educator at 2:12 PM No comments: