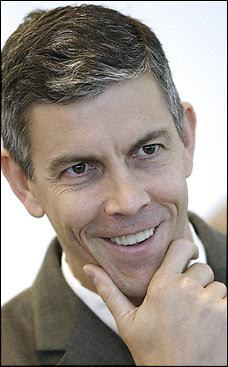 Here are a couple of reactions to Obama's choosing of Chicago Schools head Arne Dunce to be his Secretary of Education. 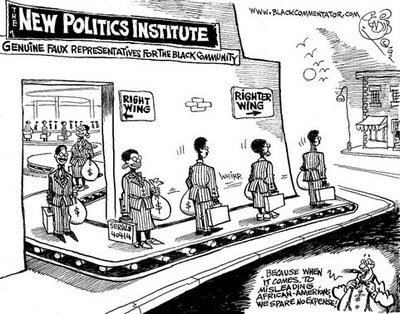 From me...
Arne Duncan is a very WRONG choice for Ed Secretary if Obama's seeking CHANGE in the nation's education crisis. Arne Duncan is a Continuator of the No Child Left Behind Mess. He is another noneducator who is pro-privatization, pro-hi stakes testing... a minimizer of parental and student involvement, a- at best -middle of the roader when it comes to curriculum reform. He is NOT an advocate of nonEurocentric curriculum development. Rather, he favors the replication of elite white private schools' a la KIPPS Academy- not cultural literacy and culturally relevant teaching and learning. Obama's choice of Duncan tells us that is in agreement with the Bush-Bloomberg-Klein policies of further institutionalizing public schools as cash cows for big business and anti-intellectual centers for workingclass children. Further, the selection of Arne Duncan signals the continuation of Schools-as-preprisons within our mainly Black and Latino urban centers. He may last two years in this position, furthering the spiralling national education crisis and throwing billions at big business's versions of "education solutions." Fellow Educators for Real Change, our fight for quality free public education, our fight to repeal the No Child Left Behind Mess, our fight to mandate antiracist curricula continues.... We clearly have our work cut out for us. Sam Anderson
-----------------------------------
From brianroa@hotmail.com...
Arne Duncan called Englewood students a "culture of failure" as Chicago Public Schools worked on charterizing that school. Senn High School got called a "dumping ground for immigrants" at a school board meeting by an advocate of a naval academy being bulldozed into Senn. Senn has students from over 50 countries. Julian High School students have endured being called 'trash' by those who demonize it for being a school which accepts students displaced by Renaissance 2015. Renaissance 2015, AKA Renaissance 2010, is the school 'reform' plan trumpeted by Duncan, designed by Chicago business interests, and unrolled by Mayer Daley.

Duncan and his cartel want to privatize schools and need radical rhetoric in order to justify the destruction of this public good. Students and the teachers get demonized and become collateral damage in this violence .

Schools are badly in need of improvement. Parents and the community are desperate for good schools in an environment where schools are starved for funds.. Well funded schools and slick PR campaigns, followed by Duncan's talking points of 'choice,' 'accountability' and 'children first,' deceive the public into believing that we are receiving the best possible schools for children. A false dichotomy of "accept the status quo or accept privatized education is spewed throughout." No viable alternatives are considered.

Education is a basic human right. All people have a right to equitable education. Chicago's two-tiered school system showers a small minority of schools with vast resources and warehouses the rest of the students. The warehoused students then get slandered and attacked when their school needs to be shut down to make way for 'better' students.

This is the system that Duncan represents. He is a smooth-talking destroyer of the public good. 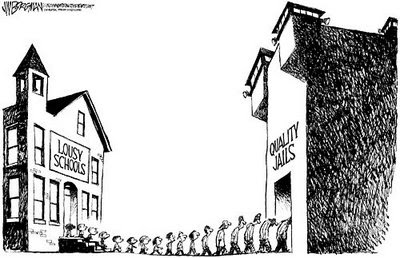 Posted by Black Educator at 10:14 AM No comments: