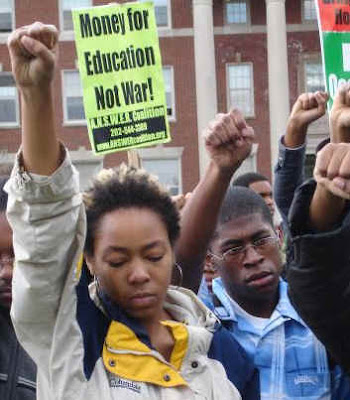 • Black children are labeled mentally retarded nearly 300 percent more than White children and only 8.4 percent of Black males are identified and enrolled in gifted and talented classes.

• Black males in their early 30s are twice as likely to have prison records (22 percent) than bachelor’s degrees (12 percent).

• A Black male born in 1991 (today’s 7th grade student) has a 29 percent chance of spending time in prison at some point in his life. The figure for Hispanic males is 16 percent, and for White males is 4 percent.

• A Black male is 700 percent more likely than a White male to be sentenced to a local, state, or federal prison.

17.5 percent of Black students, 13.2 percent of Hispanic students, and 9.3 percent of White students in grades K-12 were retained at least one grade.3

13 percent of Blacks ages 16-24 have not earned a high school credential. The rate for Whites is 7 percent.

The average ACT score for Black students is 16.9; for Whites it is nearly 30 percent higher at 21.8.

The unemployment rate for Blacks ages 16-19 is 25 percent.

National Center for Education Statistics. (2003). Status and Trends in the Education of Blacks. U.S. Department of Education.

National Center for Education Statistics. (1995). The Condition of Education, 1994: The Educational Progress of Black Students. U.S. Department of Education.

National Center for Education Statistics. (2001). The Condition of Education,
2001. U.S. Department of Education.