Scholars Undo the “Whitening” of Egypt 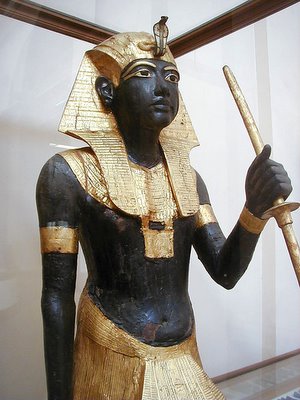 Scholars Undo the “Whitening” of Egypt

The Continued Importance of a Militant Black History Month 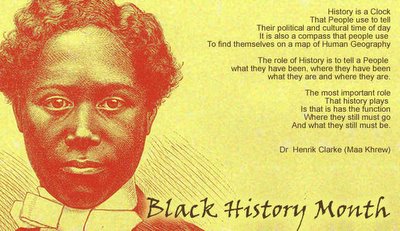 We need to put Black History month in the context of our Black Liberation Struggle. That is to say, Carter G. Woodson ASSERTED a Black History Week. He did not ask for permission from whitefolks. He ASSERTED it because there was a strong Black Social Movement underway; the New Negro Movement and... soon-to-follow the Garvey/UNIA-Harlem Renaissance Movement. Brotha Woodson promoted "Negro History Week" and the Black National Anthem ("Lift Every Voice & Sing") as both POLITICAL and CULTURAL acts within a violently hostile and deeply segrgegated nation. It was an effort to raise the consciousness and self-confidence of a racially oppressed people within the normalized world of white supremacy and imperialism. Du Bois and Garvery were on parallel paths with this very same thing in mind... along with thousands of young militant Black cultural workers thruout Black America evolving out of the "Harlem Renaissance Movement."

The February "Negro History" week was used not only to reflect and educate about our history of Struggle & resistance, it was also used to mobilize Blackfolk to fight against the daily racist terror and for true democracy and equity to prevail within the US borders. This purpose was nurtured and took on new more militant forms within the 1960's and 70's Civil Right/Black Liberation Movement(s). It was during this period that grassroots groups and individuals fought for setting aside the entire month of Februray for Black History celebration AND mobilization. Remember, during these decades, it was never about making Black History a government sanctioned event... or even a corporate sponsored one (that comes with capital's desire/need to pimp off every social/cultural attribute of its citizens).

For many decades, Black History Month was about bringing Black America's communities- especially its youth- together for reflection, renewal and action. From these Black History Month activities came, for example, the struggle to make Martin Luther King's birthday a national holiday; to systematically continue to celebrate the power, life and legacy of Brother Malcolm X; to make the connection with the Wars the US was waging to our anti-imperialist stances to those wars; to hilite the prominance and power of our fighting Sisters in such a way that an aspect of Black History Month flowed into International Working Women's Month (March).

In Other words, Negro/Black History Week/Month was a way for militant/nationalist Blackfolk to POLITICALLY mobilize thruout Black America from the 1930s thru the 70s.

But white supremacy within late capitalism had a way to absorb these militant nationalist moves as our overall Black Liberation Struggle disintegrated because of COINTELPRO actions and our own errors. By the late 70s/early 80s Budweiser and other capitalist multinationals saw that they could make money off of the nationalist sentiments of Black History Month. Simultaneously, some liberal and conservative elected officials saw the value in embracing Black History Month AND trivializing it down to food, song and dance and 6 or 8 Great Black Leaders. Eventually, these were the primary organizers and definers of Black History and the month. Today, they are the prime movers and shakers with their Black petty bourgeois wannabes promoting their "We too are Americans" myths and prettifying the centuries of enslaving Africans.

Just try to find a Black calander (outside of the Black Fax one) that celebrates our history as one of Struggle and Resistance. In 2006, Black calendars are celebrating our beauty, our ability to produce pretty Black art. We rarely ever see a calendar depicting how we fought back, our runaways, our Nat Turners and Gabriel Prossers, our Harriets and Callie Houses, Ida B Wells, Our George Jacksons and Malcoms. Calendars that show the militancy of the Black Reconstruction/New Negro/Civil Rights/Black Liberation Movements are now nonexistent.... Where are the Robert F. Williams, Malcolm X, Ruby Doris Robinsons calendars...?

The point I'm trying to make is this: Black History Month (many of us used to call it "Black Liberation Month") should be seen as a month of reconsolidating and recommitting ourselves to the struggle for Black Liberation- Just like we use to see May as African Liberation Month as doing just that. We should see February as a month of POLITICAL MOBILIZATION thru our culture and our powerful history. A month that helps bring our youngfolk into the struggle-mode. Black History Month should be seen as an ORGANIZING moment that WE define- in spite of what the rulers of this nation desire- in spite of what set of their negros and special sales and bogus TV programs they produce to pacify us in our misery.

Black History Month as an educational/mobilizing vehicle must be re-established. This can only be done by being actively engaged in our recpective communities. Not pontificators on the sidelines or in ebony towers.... Brother Carter G. Woodson envisioned his Week as just this: a consciousness-raising AND mobilizing vehicle.

Now more than ever, we need to continue Brother Woodson's vision.