Fiscal Cliff? Fiscal Curb? Fiscal Pimple in the Road?
Whatever It Is, the 99% Is In Deeper Economic Trouble! 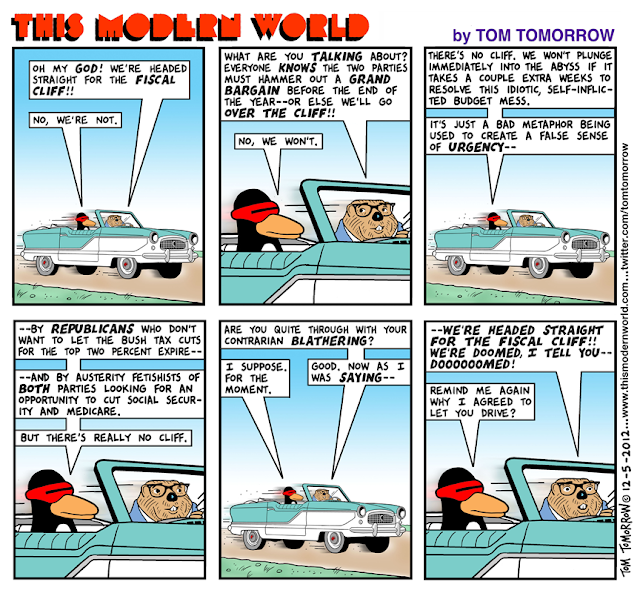 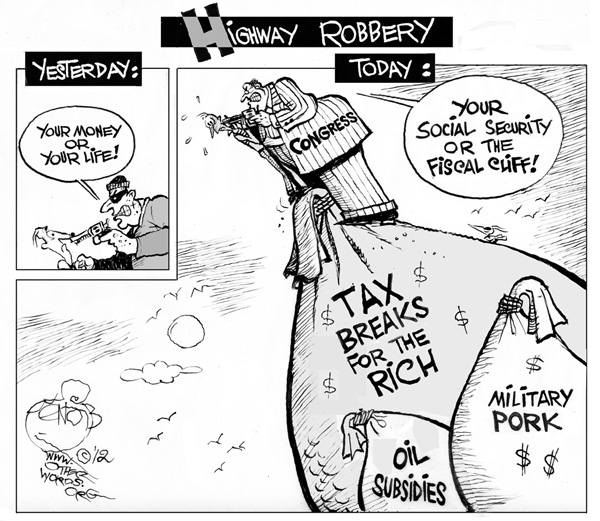 Posted by Black Educator at 5:02 PM No comments: 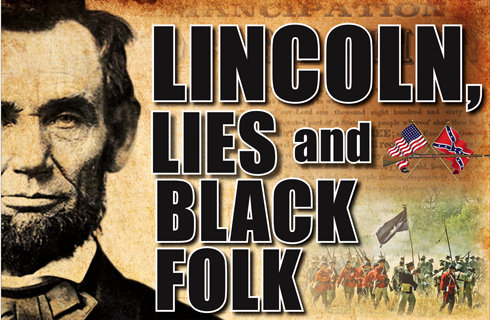 (FinalCall.com) - Steven Spielberg’s Lincoln opened last week, and many have flocked to see this Hollywood version of one of the nation’s most tumultuous times—the American Civil War. The film purports to recount the last months of the life of Abraham Lincoln as he lobbied to achieve the passage of the 13th Amendment to the Constitution, which is said to have ended legal slavery in America—at least on paper.

Spielberg is the master of American propaganda, and there is no one since the notorious director D.W. Griffith who has more successfully exported to the world a utopian vision of America as a Caucasian paradise. And while his White characters—from Jaws to ET to Amistad—show a range of virtues, his Black characters have been limited to cardboard portrayals of simplistic and racially clichéd stereotypes.

This is the inescapable context with which one must approach Spielberg’s Lincoln, a film that is no more accurate in its depiction of a critical period in history than George Bush was about the so-called weapons-of-mass-destruction lie that brought a world of nations to endless war.
First, let us take a couple of paragraphs to dispose of some well-entrenched historical myths.

No war in the 6,600-year history of the White man has ever been fought for the benefit of Blacks—never has happened and never will. If the North fought to “free the slaves,” then why did the war start with the slaveholding South attacking the Union at Fort Sumter? Should it not have been the reverse? 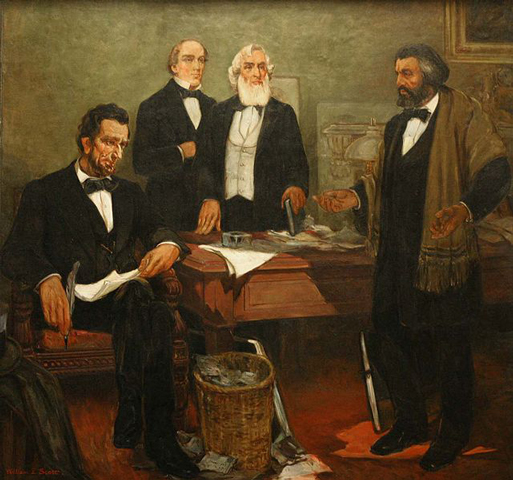 This mural shows Frederick Douglass asking President Abraham Lincoln to allow black soldiers to serve in the Union army during the Civil War. Gideon Welles, the Secretary of the Navy, and Salmon P. Chase, Secretary of the Treasury, are the two men standing in the back. The image surely depicts a fictional event: although Lincoln and Douglass met three times at the White House, those meetings took place after Congress approved the use of blacks as soldiers in the Union armed forces. This was missing from Spielberg's Lincoln.

The Civil War was fought between two sets of White people to see which one would benefit most from the multitude of products America derived from Black slave labor. Southerners realized that the engines of the American economy—cotton and slaves—were in their territory. They resented that the big banks in the North were making most of the profits from their plantations. They decided to end that one-sided relationship and SEPARATE from America. Abraham Lincoln knew that America would collapse without Southern slavery and reluctantly fought the war to maintain the UNION of North and South—and, most important, to keep the slavery wealth flowing from South to North.

No one fought to free Black people, and, indeed, before a single shot was fired both sides agreed to the Crittenden Resolution, which made it clear that the war would not target what they called “established institutions,” namely, Black slavery. 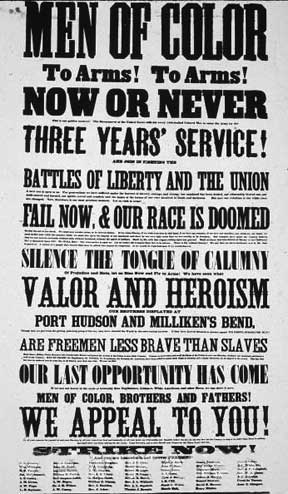 Here are a few more points:

• While still engaged in the war, Union General Benjamin F. Butler placed his troops at the disposal of the governor of Maryland to repress a rumored slave insurrection.
• In 1861, when General John C. Fremont freed all slaves in the state of Missouri, Lincoln fired him. When General David Hunter freed the slaves in three states, Lincoln cancelled and reversed the order.
• Union military camps were closed to runaway slaves, and some poor Black souls were actually captured by Union soldiers and returned to their rebel owners!
• Most abolitionists were White workers who HATED Blacks but wanted an end to slavery so that they—Whites—would not have to compete with Black workers.
• Lincoln had no intention of establishing “integration” and in 1862 sent 450 “freed” slaves to an island off the coast of Haiti in an ill-fated colonization scheme. The navy had to be sent to retrieve the beleaguered Blacks.
• Lincoln publicly voiced support for the Fugitive Slave Law, which made every American citizen—North and South—responsible for catching runaway slaves.

***
Contrary to popular belief, Lincoln’s famous Emancipation Proclamation did not “free” a single Black person from chattel slavery—not one. When it looked like the Union was losing the war, Lincoln “freed” slaves in the South so that they could fight against their masters. In that same document he made sure that slavery was not disturbed where it existed in the North!
These are hardly the acts of a Saviour or of a Salvation Army. But they are truths that dirty the image of Lincoln, whom Spielberg is posing as America’s very own Christ figure—the man who died for the racial sins of a nation.

Spielberg is intent on hiding these important facts, portraying his subject as the avuncular oracle of racial kindness. But Spielberg is not so charitable with the Black characters that appear throughout his wartime fairytale. It opens with a combat scene, but the first death we see is a Black man stabbed in the chest with a bayonet—Spielberg preserves an honored Hollywood tradition that Blacks must be the first to die.

President Lincoln is then shown in the midst of a Union camp earnestly listening to the battlefield accounts of two Black soldiers. Spielberg puts them with the Second Kansas Colored Regiment, an actual Black military unit, though their encounter with the President is totally fictional. What is troubling is that one of the soldiers describes a combat event in which, he says, his colored unit “killed them all”—every last one of them. This is a description of a war atrocity—not a battle in which the enemy was beaten badly—and it is Spielberg’s way of making the Black race responsible for the extreme brutality of America’s deadliest war (750,000 dead). The Jenkins Ferry battle was indeed brutal and bloody, but if an order were given to “kill them all” it would have had to come from the White leader of the “colored” unit. 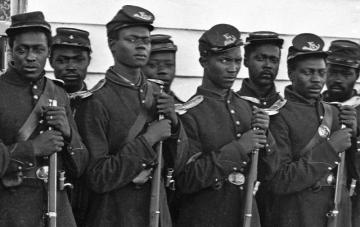 Spielberg’s other Black soldier presses the President for equality in an unrealistically brash dialogue that would have earned him time in a dungeon after many lashes. Yet Spielberg’s brazen Negro has the temerity to ask Lincoln for a job! This again is a bold falsehood that misstates the actual condition of the Black race. Blacks were not asking for jobs—because during slavery and for a time after the war they dominated all of the skilled crafts in the South and were capable builders, inventors, and independent-minded believers in their own talents and skills. The fact is, Whites feared that freeing Blacks would leave Whites totally stranded and uncared for. In many cases, the Black slave of a White family was the only breadwinner in that family! If America were to actually allow the ex-slave 40 acres, a mule, and the vote, Whites would be homeless, friendless and hopeless in a matter of days.

From there, Spielberg gives us Black caricatures direct from the set of Gone With The Wind. We see Mrs. Lincoln’s mulatto maid, Mr. Lincoln’s dutiful butler, the trusty carriage driver, the obligatory Blacks praising God for the White man’s largesse, and the Lincolns’ child oddly playing with slavery photos like they are baseball cards. Jewish writer Tony Kushner puts “nigger” in the mouths of too many whiteys, but not in the mouth of Lincoln, who actually used the word with chilling regularity.

And then there is the last scene, when Thaddeus Stevens, played by Tommy Lee Jones, grabs the original copy of the 13th Amendment and brings it home, where he is greeted by his Black housekeeper Lydia Smith, played by S. Epatha Merkerson. He presents it to her with the words “a gift for you,” whereupon the satisfied servant crawls into bed with the White man, for a night of emancipation fornication, one assumes.

Centuries of slavery meant the daily debasement and brutal rape of the Black woman (see Legitimate Rape: A Truly American History). In his nauseating reconstruction Spielberg shows us what he feels are the “benefits” of the legal end of slavery—even more of the White man’s sexual debasement of the Black woman!

In reality, Abraham Lincoln is no hero for the Black man. Ebony Magazine editor historian Lerone Bennett wrote a landmark 652-page book titled Forced Into Glory that really ends all debate in the matter. But Hollywood would have to hold its nose in reading the true history of Lincoln’s racial words and deeds. And then there’s the forgotten fate of the Native American, whose Holocaust was accelerated by Lincoln’s murderous expansionist policies, which unleashed violent White settlement on Indian lands in the West.

In analyzing the insufferable idolization of this supreme White supremacist, one is reminded of the words of Elijah Muhammad: “Abraham Lincoln was not instrumental in trying to free you….The truth will make you free.”
Posted by Black Educator at 1:08 PM No comments: