From New Orleans to New York to Nairobi: Housing is a Human Right!

This is the Black Agenda Morning Shot for Monday, August 30, 2010 being brought to you by Kali Akuno from New Orleans, Louisiana. As Black August 2010 draws to a close, Black people in New Orleans, the Mississippi Gulf Coast, and throughout the country commemorated the Ma’afa or great calamity of Hurricane Katrina that struck the Mississippi Gulf Coast on August 29th, 2005.

The day was one of remembrance for those who needlessly lost their lives due to government incompetence and strategic neglect and those who were and remain displaced. It was also a day of continued resistance to the ethnic and class cleansing taking place in New Orleans and other Black and oppressed communities throughout the Gulf Coast.

Perhaps the most strategic act of resistance occurred in the St. Bernard Community of New Orleans where Survivors Village protested President Barack Obama’s visit of the Columbia Parc development, which rests on the site of the demolished St. Bernard Development.

In a statement issued after the demonstration, Survivors Village stated: “as the rest of the city focused on the disaster of August 29, 2005 as an event that happened and has passed, residents of public housing and supporters stood in an all day rain to protest the visit of President Obama to a neighborhood that has been purged of poor people, turned over to Warren Buffet and his investor friends, and is being promoted as the future of public housing around the country.”

The future that Obama came to support today is the total privatization of public housing throughout the country, which his administration is advancing with its promotion of the PETRA Bill. As billionaire Warren Buffet stated on his visit of the Columbia Parc development in March, “New Orleans is Key”, by which he meant the total destruction of public housing which he is promoting through his Purpose Built Communities organization which he co-founded with Atlanta Tom Cousins, who administered the destruction of all of Atlanta’s public housing earlier in the decade.

However, activists in New Orleans have no intention on submitting to the designs of PETRA, or complaining with Buffett’s dreams and going the way of Atlanta. They are mobilizing on the following demands:

•  that any former resident wanting to live in Columbia Parc should be admitted immediately and unconditionally
•  that the false charges against Sharon Jasper be dropped immediately and the threat to terminate her voucher be withdrawn
•  that the demand for more than 30,000 Section 8 vouchers be met immediately, and
•  that the PETRA bill threatening to privatize public housing throughout the country be permanently withdrawn.
------------------------
To learn more about this story or to support the initiatives of Survivors Village visit http://communitiesrising.wordpress.com.
Also visit the US Human Rights Network www.ushrnetwork.org.
Again, this is Kali Akuno bringing you some news you can use for the Black Agenda Report.
Posted by Black Educator at 9:21 AM No comments:

Fewer Than Half of African-American
Males Graduate from High School
on Time, Schott Report Finds
www.blackboysreport.org
Despite the hype about education progress in NYC's schools by Mayor Bloomberg and his YESMen, our young Black Male citizens are deeper into the School-to-Prison Pipeline. A mere 28 out of 100 young Brothers graduate. Let's not even talk about what those graduates know since they -on average (median or mean... take your pick... either way, it reveals Educational Genocide)- read and do math at 3rd and 4th grade levels. The solution here in NYC and across Black America is in Our Black Hands and Minds-- not some corporate-sponsored hype machines called Green Dot, Kipp or Harlem Children's Zone. 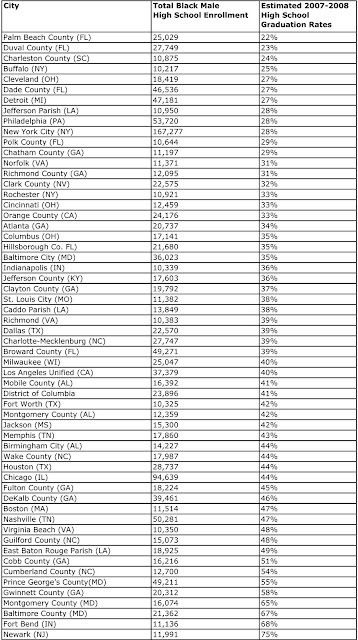 Posted by Black Educator at 12:34 PM No comments:

Is Princeton's DuBois Institute's Scholars Summer Program Trying to Create a 21st Century "Talented Tenth"?
Take a look at this short video news report and see whether or not they (The WEB DuBois Institute at Princenton University) are trying to create what DuBois in his later life saw as an elitist error. Please also read their statements below so as to generate your own understanding of what they are trying to do.

WEB DuBois realized that true leaders emerge from sites of struggle-- not manufactured out the of ebony and ivory towers of academe. Yes, many of our 20th Century leaders were Sisters and Brothers who came thru colleges. But their leadership skills and acceptance came via struggles in our communities and places of work.

The Revolutionary Leader commits class suicide and hence, dedicates her/his life to the Liberation of her/his people. This does not have to mean that one gives up their profession. It means that one pushes their profession as far as it can go for the sake of advancing the Black Liberation Struggle. I don't get that sense of development with this Princeton based Institute that is named after a great Black Revolutionary who dedicated almost nine decades of his life to the fundamental social and economic transformation of US Society so as to help make Black Liberation a reality.

Dubois, like Martin Luther King, is being pimped by those very same class enemies of the vast majority of our People. It is great to see the young Sisters and Brothers from different class backgrounds coming together for 5 intellectually intensive weeks. But to have the goal of being elite "leaders" who will legitimate and guide our people further into the HellHole called Capitalism is absolutely wrong!

And we need to challenge that at every opportunity we get!

I also understand that this is about the only thing that could come out of the Princeton of 2010. why? Because we are now in an age when reactionary ideas and policies dominate academia. The liberals and progressives in academia have been kicked to the curb or sequestered in academe's version of "the box" (i.e. intellectual solitary confinement). Class stratification among Black students and faculty is more pronounced now than since the 1940s and 50s when E Franklin Frazier was observing and writing about the budding Black petty bourgeoisie.

I am sure many of you who have not yet given up The Good Fight have ideas on how we can combat this creeping malaise of the "Niggeoisie." Feel free to post your suggestions here!
-------------------

Message From the Executive Director

Guided by an inspired sense of duty to help our people and make America better, the W.E.B. DuBois Scholars Institute was founded in 1988 with the aim of solving some of society’s intractable problems of poverty, urban decay, and disintegrating families, not by attacking the problems but by strengthening the solution. The solvers of these problems will most likely come from the high-achieving African- American and Latino-American youths that demonstrate an ability to lead and achieve both in and out of the classroom. The Institute provides training to equip them with the skills and confidence to function as effective “change agents” in their schools, their communities, and the community at large. For the duration of its existence; the W.E.B. DuBois Scholars Institute has benefitted from the support of many people, groups, and organizations. Many people have volunteered their service and talents as well as financial support on our behalf.


As we begin the first quarter of the 21st century, hopelessness, despair, and poverty remain problems of epidemic proportions in African-American and Latino-American urban communities. After decades of neglect in a society that is rapidly changing through advancement in technology, science and education, these problems have become increasingly more complex and difficult to understand and solve. They have contributed to a steady increase in the education and economic gaps that exist between impoverished urban and affluent suburban households. As such, the need for cadres of highly trained scholars, leaders, and entrepreneurs who are committed to mobilizing their talents and other resources to improve their comminutes and the nation is greater now than ever before.

Hence, at this phase of the W.E.B. DuBois Scholars Institute’s existence, it is appropriate for us to reflect on its effectiveness. What is its real value? To what extent are former participants engaged in personal growth and community service activities consistent with the aims of the Institute?

Each year from 1988 to the present, we have maintained statistical data in such areas as student participants’ academic-achievement records and leadership activities. It is clear from the data, as well as from reports from students, parents, educators, and community leaders that the Institute is on target in preparing the quality of minds and character that will be needed in the new century. We find that young scholars, after attending the Institute, often move on with higher expectations for themselves; have a more informed world view; and have a commitment to engage their talents in the study of complex problems and in improving the lives of others.

Though in some ways its simplicity flies in the face of wisdom: Our aim is to help solve some of society’s intractable problems of poverty, urban decay and disintegrating families, not just by attacking the problems, but by strengthening the solution. Activist scholars, who possess a commitment to eliminating poverty and racism are an integral part of that solution. As they mature, these potential leaders are expected to work collectively to provide hope, direction and vision for African-Americans and Latino-Americans in the 21st century.

Indeed, that is the essence of the Institute’s philosophy: Giving Back.

Since its inception in 1988, a primary aim of the W.E.B. DuBois Scholars Institute has been to develop a cadre of young leaders / scholars with a sense of community purpose, who would be committed to giving back for the betterment of their communities and nation. As they evolve into maturity, these potential leaders are expected to provide hope, direction, and vision for African-Americans and Latino-Americans in the 21st century. The Institute provides training designed to develop such cadres of brilliant minds from these groups who will possess a commitment to eliminating poverty and racism, and will inspire the masses to overcome conditions that impede their prosperity and pursuit of happiness.
====================


...And a Lil Sumthin Sumthin via Poltical HipHop... What if the Tea Party Was BLACK? 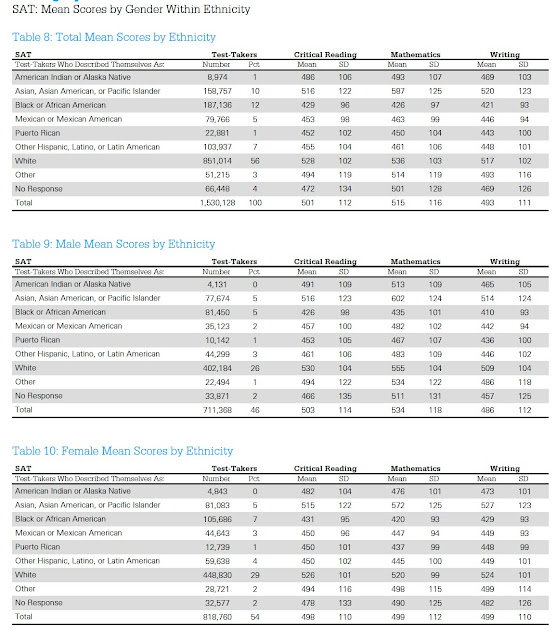 Let's Look at the Racial Disparity a little closer...

...And the Gap is Widening!

French riot police have been captured on video dragging immigrant women along the ground with babies on their backs during an eviction.

The video posted on the web shows officers armed with batons scuffling with African immigrant squatters from an encampment in the suburbs of Paris.
One of the women is visibly pregnant.

A mother clings desperately to her terrified baby during the eviction
The footage, shot by a member of a housing-rights organisation, shows police dragging a woman across the ground with her infant trailing behind in the dirt.
No-one was injured in the July 21 operation in La Courneuve, a suburb northeast of Paris, local officials said.
But human rights campaigners denounced the "brutal evacuation" of some 200 people.

A baby - strapped to its mother's back - is dragged along the dirt
MRAP, a leading human rights group, said people in the video had all been expelled from previous housing and provided with no long-term solutions.
The evacuation was handled "according to legal procedures and rules", the government of the Seine-Saint-Denis region around La Corneuve said.
French politicians and the media have attacked a host of new government proposals targeting immigrants suspected of crimes.

A pregnant woman is dragged along the ground by riot police
They have accused President Nicolas Sarkozy of pandering to the far-right in a bid to boost his popularity.
The interior minister defended the measures, calling them part of France's "war against insecurity".
Posted by Black Educator at 10:27 AM No comments: