When audiences see actor Michael B. Jordan get pulled off the BART train in "Fruitvale Station [1]," they'll see the dramatized last moments of Oscar Grant's life, filmed at the actual station where BART police officer Johannes Mehserle killed him on New Year's Eve 2009. The feature film premieres nationally on July 12 to plenty of early buzz and rave reviews for director Ryan Coogler's debut effort, and for performances from actors like Jordan and Academy Award winner Octavia Spencer, who plays Grant's mother. But for many in the Bay Area who lived through Grant's death and the national outrage that followed, the real-life sets will be just as arresting.

Fruitvale Station became a landmark in the community almost immediately after Mehserle gunned Grant down there. Situated in the middle of a bustling Latino immigrant neighborhood, Fruitvale is a popular starting point for protests and marches for a range of issues. But it will forever be tied to Grant's death. "Anyone in our community can point to other locations where somebody was killed or brutalized by the police," says Dereca Blackmon, an organizer and co-founder of the Coalition Against Police Executions, which was formed after Grant's death. "What Fruitvale actually memorializes is, 'Here is where a cop was actually caught and held accountable.' "

The film opens with the cell phone footage that lit up the Internet in the days after Grant was killed. Fruitvale's cement walls and faded beams are there in the grainy cell phone vidoes. So are the glass windows looking out onto the street below, turned into mirrors in the night; the staggered brown tile floors; the fluorescent lighting and cream interior walls of the BART train. Today many people wait for their trains exactly in the spot where Grant was killed. And that same cement wall and those same dark windows are there in the movie, when Grant and his friends and Mehserle are replaced by actors.

It was New Year's Eve 2009 and Grant and his friends were on their way back to the East Bay from San Francisco. They'd taken public transit on his mom's suggestion, for safety. Along the ride a fight broke out on the train. At Fruitvale BART, transit police officers pulled Grant and his friends off the car while the train, packed with New Year's Eve revelers, idled with its doors open. Mehserle and other transit police officers were responsible for calming down the situation, but did exactly the opposite. After an officer named Tony Pirone kneed Grant and called him "a bitch ass n——-," Pirone and Mehserle moved to handcuff him—Pirone by pushing his knee down on top of Grant's neck. Mehserle stood, pulled his Sig Sauer P226 from its holster, and shot Grant in the back. Grant was lying face down on the platform. He was just 22 years old. 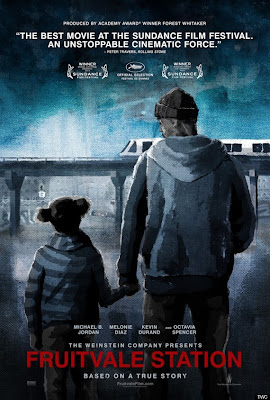 All of this was caught on video and uploaded to YouTube. It shook up the country. Police violence is nothing new for black and brown communities, but something was different this time. Mehserle shot an unarmed Grant at point blank range, while he was laying on his stomach. The cell phone videos provided unequivocal proof of the kind of police brutality that is an all too regular part of life for many young men of color.

In the days following Grant's death Davey D, host of Hard Knock Radio on KPFA in the Bay Area says he remembered seeing people in Oakland crying openly. "People were so angry and so frustrated and so in disbelief that this was happening," says Davey D. "You could see the look of pain in people's faces." Grant was killed three weeks before President Obama was first inaugurated, and the nation's glee over electing its first black president was still palpable. There was a sense that justice would be swift, the radio journalist recalls. So after the shooting happened and Obama never addressed it, and the Department of Justice's inquiry ultimately went nowhere, the letdown was especially bitter.

"Fruitvale represented a couple things. It symbolized the continuation of police brutality, and it was a stark reminder that even with a black president and a black attorney general, shit ain't changed and folks were gonna have to do it for themselves," Davey D says.

The very first community protest happened at Fruitvale Station, just over a week after Grant's death. At that first protest the energy of the crowd, so swollen with anger and pain, compelled BART officials to shut the gates to the station. (Watch YouTube footage of the protest [2].) Silence from the city's leaders compounded the community outrage, says Blackmon.

Organizers moved subsequent protests to the Alameda County courthouse to demand that the district attorney file criminal charges against Mehserle. But while the largest protests took place downtown at Frank Ogawa Plaza and in the streets of Oakland, Fruitvale remained a place to gather and protest and remember, and became a landmark.

The day before Mehserle was released from prison in 2011, hundreds gathered [3] once again to demand structural accountability and an end to police violence. There was also a community push to rename the station Oscar Grant Station. "Some people wanted to remember that," says Davey D. "And some people didn't want to go back on BART for a long time. [Police violence] happens so much that there's a certain, I wouldn't say normalization, but you just learn to cope with it."

As common as police killings of black and Latino men are, accountability rarely follows. Even Mehserle's second-degree murder charges were a victory of sorts; it's extremely rare for on-duty police officers to be charged with murder when they kill people, and even rarer still for a conviction to stick. In 2010, just three days after a judge sentenced Mehserle to two years in prison, which was the lightest possible sentence, Oakland police officers fired nine shots at a black man named Derrick Jones as he fled, hitting him six times. Jones died. In 2011 Oakland school police officers shot and killed 20-year-old Raheim Brown outside of a high school dance. Last year Oakland police officers shot and killed 18-year-old high school senior Alan Blueford after he and his friends were stopped by cops. The DA's office has declined to charge officers of those subsequent shootings with any criminal wrongdoing. 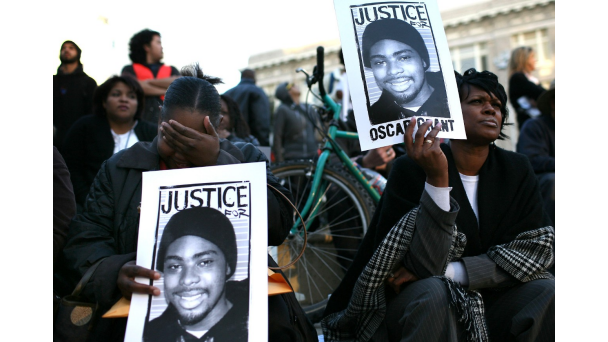 This ever elusive justice has activists questioning the utility of turning to the criminal justice system to demand accountability of its own members. "We've started asking the question: Does it make sense to ask the institutions that kill us for justice?" said Cat Brooks, a co-chair of the Onyx Organizing Committee, a group dedicated to ending police violence.

"For me, the most important conversation that is happening now is how do we grow this beyond any individual young man into a larger campaign against police terror? How do we come together to create enough pushback … so they know they can't get away with it anymore?" Brooks said. Almost five years on from Grant's death, Brooks, who lives in West Oakland, still avoids the Fruitvale BART station as much as she can. "It is and forever will be where Johannes Mehserle executed Oscar Grant."

Every year on the anniversary of his death, Grant's family and community gather at Fruitvale for a remembrance of his life. It's a tradition now. "But what ends up happening," Blackmon says, "is there's always five more mothers standing next to [Grant's mother] Wanda, every year."