Build the Black and Brown Alliance for Justice and Human Rights!

NOTE: This is a collective statement linking the new Immigration struggles with that of Black America's rejuvenating Black Liberation Movement from the Gulf Coast to New York City's Transit workers' (and hundreds of thousands of other workers') struggle for dignity, power and living wages. One can visit our online petition and endorse this effort to forge Black/Brown Unity in the 21st Century.
------------------------------- 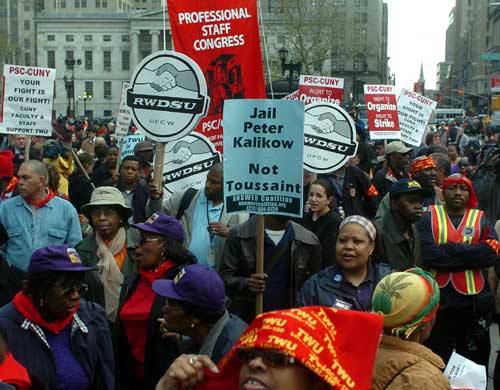 Build the Black and Brown Alliance for Justice and Human Rights!


Hurricane Katrina was a 21st Century snapshot of the genocidal direction of the US government. It exposed the reality of conditions faced by working class African Americans and peoples of color under US style democracy. It also creates a new sense of urgency to mobilize power outside of the electoral arena to challenge racist and repressive legislation like HR 4437. There has yet to be a massive upsurge that expresses the deep outrage of the African American masses against the US government for this crime against humanity.

The US government’s cutting of funds to repair Gulf Coast levees led to hundreds of avoidable deaths of working class African Americans and poor people and massive destruction of homes, personal belongings and social institutions by the flood waters of Hurricanes Katrina and Rita. Now the government wants to enact legislation to allocate funds to construct a 700-mile wall of death along the US-Mexican border and racist policies to keep Mexican and Latino workers out and to further marginalize them within the US economy and political system. These are two sides of the same US imperialist system of national oppression.

At the heart of the conditions faced by the African Americans in the Gulf Coast and throughout the Black Belt South, is the role that the South has played for centuries as a center for US exploitation; super exploiting Black labor and squeezing super profits out of every aspect of Black life leaving little to no resources for healthcare, education, housing and other infrastructure for addressing human needs. The rapidly growing immigrant Latino population in the South also suffers and is oppressed by these long standing and racist conditions that are further intensified by language and cultural oppression.

The upsurge among Latinos throughout the US against the criminalization and attacks on undocumented Mexican and Latino immigrants and the political tone of resistance it is setting, must be seen as a direct challenge to the Bush led government and corporate agenda that left thousands of African Americans to die in the Gulf Coast—and who tried to make them the scapegoat for the governments deliberate neglect and failed evacuation. The Reconstruction movement developing in the Gulf Coast and among African Americans nationally must embrace and unite with this mass upsurge as a call to action for all of the oppressed to boldly resist repression and genocide.

Let’s be clear. The corporations want to super exploit immigrant workers. They just don’t want to be responsible for paying them the value of their labor or to provide social services and basic democratic rights that enable them to survive and raise their families. They are using the anti immigrant legislation to mask the truth about the massive unemployment and the crises facing US workers and the huge financial debt of the government that has been caused by corporate bailouts, restructuring and imperialist wars—trying to make immigrants the scapegoats for the crisis. This criminalization is also aimed at creating a xenophobic (hate of foreigners) against the rising tide of change developing throughout Latin and South America that challenges US global policies.

The efforts by the US government and corporate media to divide African Americans and Latinos are no accident and should not be ignored. They try to make each community feel that it is more deserving than the other of the crumbs and political status given them by the two major political parties and US government. By centering all politics on elections, one community is played against the other by projecting them as voting blocks. Witness the media mantra over the past 4 years: “The rising number of Latino voters threatens to end both GOP and Democratic courting of the black vote and could push concerns specific to Blacks to the sidelines.” (Pacific News Service April 10, 2006, Earl Ofari)

Yet, the wages of workers of both communities are the lowest; and their institutions and public services are the most neglected by local, state and federal government. The regions where the majorities of African Americans and Latinos have lived since the founding of the US—the South and Southwest are where the working class are most economically exploited, politically oppressed, systematically disenfranchised and suffer the most brutal racist treatment. The unity of these two communities would constitute a major political force for human rights and global justice.

US corporations have closed hundreds of plants in the US and moved them to Mexico to exploit cheap labor and have impose economic policies on the Mexican government like NAFTA that has caused massive unemployment for many agricultural workers and small farmers in Mexico. These plant closings have created massive unemployment in the North and Midwest especially among African American workers causing the deterioration of major urban inner cities. This has fostered a reverse migration of many Black workers back to the South since 1970. Both migrations result from US economic oppression in the US and Mexico.

The dispersal of thousands of mainly African Americans throughout the US from the Gulf Coast was a racist act using the disaster to carry out a form of ethnic cleansing—trying to eliminate the Black majority in New Orleans and the Gulf Coast in the interest of white political rule and corporate profits. The evacuees are experiencing government abuses—forced evictions, voting rights obstacles and racist treatment from FEMA with no organization or political base to resist from without the support of activist forces within the African American liberation and progressive social movements in the various cities.

Like the undocumented Immigrant Latino workers, the media has criminalized Hurricane Katrina and Rita Survivors, labeling them as “rapists”, “drug dealers” and “con artists” “invading” other people’s cities and communities. This criminalization is done to take attention off of the government abuses and corporate corruption and to try and justify government repression. African American evacuees from the Gulf Coast have become internal US “immigrants” with an uncertain future.

Forced migration has been part of the reality of oppressed nationalities in the US, beginning with the Native Americans who were forced off their traditional lands and African Americans many being forced out of the South where they lived and worked for more than 300 years. The “illegal” label placed on undocumented immigrants by the US government and white supremacists should be rejected in the vocabularies of all oppressed nationalities in particular and all working people in general.

It is important to point out within the African American community the important role played by Mexico in the struggle against slavery. When Mexico won its independence from Spain in 1821, it banned slavery throughout its country. Thousands of runaway slaves went into Mexico to escape slavery. This angered Southern plantation owners and the US government who declared that white supremacy should be the law of the land—promoting “Manifest Destiny” as its imperialist slogan. Mexico’s opposition to slavery was a factor leading to the US government’s military invasion of Mexico in the 1840s and its annexation of 1/3 of Mexico’s country. Even in defeat, Mexico refused to include a provision to return runaway slaves in the peace treaty following the US and Mexican war. African Americans must also support the right of Mexican and Latino immigrants to cross the US border without repression and criminalization in search of work and social needs to support their families.

Yes, there must be recognition that these are two independent movements with their own demands and leaderships. However, there must also be a conscious effort to develop an understanding and practical work to build the political and strategic links and interdependence of these movements as a force for progressive social change throughout the US and for global justice. Workers and pressed peoples throughout the world have been desperately hoping for such a powerful interconnecting movement to develop inside of the US.

Reconstruction in the Gulf Coast must not be just a physical rebuilding project, rebuilding institutions and social relations as they were prior to the disaster. It must be a movement to build people’s democratic control of resources, policies and institutions based on self determination that involves the Black majority and working class masses in deciding the terms and conditions of their Reconstruction. It must fight for democratic rights and worker protections for undocumented immigrants and must include them in the discussions and mass decision making processes of the Reconstruction movement in the Gulf Coast and among the dispersed Survivors.

This Reconstruction movement in the Gulf Coast must help to point out the need for the complete Reconstruction of the whole of US society and contribute to the building of such a movement. This will help people to better understand the importance of the struggle against racism and for African American self-determination in bringing this about.

This Reconstruction movement must draw on one of the most progressive periods in US history – the African American and white progressive led Reconstruction era in the South after the Civil War. These governments were the first to assure free public education for all people, gave women the vote and built public institutions that were open to all without discrimination.

As the two largest and super-exploited nationally oppressed communities inside the US, the fate of African Americans and Latinos are connected, especially under a system that is rapidly eliminating democratic rights and labeling all peoples of color as potential “terrorists.” Black and Brown unity will help to expose the deep racist nature of US democracy and raise the bar of the struggle against racism among those who really want radical change.

The call for a May 1st national boycott of jobs, businesses and schools is a protest against the US government’s repressing of people’s human rights and relegating them to needs to racism and corporate greed. It is a call to action for people to boldly challenge a government that criminalizes people for trying to work to support their families; that would leave its people to die in the Gulf Coast, and that spends billions for wars to kill and dominate the world.

May 1st – “May Day” – is celebrated by millions of workers throughout the world to express the need for worker solidarity in the struggles for workers rights and human rights. It began based on a struggle by US workers in the 1880’s for the eight-hour day and in opposition to government repression against the labor movement. The May 1st Boycott must also be a mobilization that calls for a major campaign to build Black and Brown unity as an anchor for the unity of people of color and workers in struggling for human rights and global justice.


Boycott Against Immigrant Repression and for Gulf Coast Reconstruction!
Posted by Black Educator at 9:44 AM

Get your High School Diploma, Or any Desired College Degree, In less then 2 weeks.

Get these Degrees NOW!!!

Get everything within 2 weeks.
100% verifiable, this is a real deal

Act now you owe it to your future.