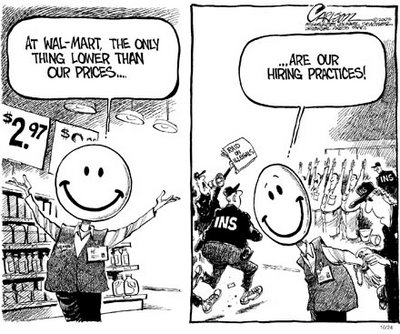 The US Education system and news media has made sure that folk in the US have no historical knoweldge of all the various kinds of anti-immigration policies, acts, laws that permeates the history of this nation: The Chinese Exclusionary Act, The Irish, Italian, Jewish, Caribbean, Arab/Muslim, Japanese, Phillipino, Korean...exclusionary/limitation rulings....

The real sapping of job opportunity and higher salaries are the rich and superrich who are overwhelmingly white due to the continuing legacy of slavery, colonialism and racism. Look at the ridiculous supersalaries of the megacorporate execs: billionaires with free medical care and fantastic tax loopholes. These millionaires and multibillionaires
have allegiance only to the dollar. Just look how their patriotism to the dollar has exported tens of thousands of jobs out of the US. They have promoted US patriotism among the US citizenry while snatching the economic rug from under our feet because their profits need to be maximized by any ruthless means necessary.

These rulingclass people use the US government in such a way that benefits their interests while syphoning off hundreds of billions of dollars from national social development for an imperial war for oil and global dominance.

Objectively, Blackfolk have never been part of the "WE" the hundreds of thousands of misinformed and dis-informed among us speak of.

Blackfolk in this country have always been the foundational "OTHER."

We were never asked whether we wanted to be citizens of this racist nation after slavery. Citizenship- of sorts- was imposed upon us by white decree... and then a series of Jim Crow laws and other forms of institutional racism became the norm of this nation. It, in turn, became the way all 19th, 20th and 21st Century immigrants into the US were/are defined.

Divide and conquer is the order of the day around this immigration issue: Black against Brown and Yellow. Us-born Africans against those born elsewhere. The white workingclass against ALL people of color... and ignorantly blaming all of us various shades of "niggers" for their financial, psychological and moral woes- not the Trumps, Bloombergs, Kleins, Bushes, Martha Stewarts, Bill Gates... WalMart/MacDonalds/Exxon/Enron execs.

The real issue is that this nation has enough wealth and enough work to do to employ everyone here right now -AND hundreds of thousands more- for a lifetime at an average living wage rate of at least $20/hr. Our fight is to make this real
by fighting for the redistribution of the wealth and, therefore, people power control over what is made and how it is distributed.

"Our" borders span the globe- not those defined by racist slave owners who committed genocide as they "immigrated" into this continent. However, if you support the basic tenets of capitalism and its cohort- racism, then you can
perceive of yourself- your Black self -as being part of the "WE" that includes Bush, Cheney, George Washington, Custer, Lester Maddox, J. Edgar Hoover, the Klan, The Minutemen currently "patrolling" the US-Mexican borders, the white babblers on Fox,CNN,NBC,CBS,ABC, etc as well as those who write anti-immigrant nonsense in the print media.

A United Front of People of Color right here in the US is an essential organizing effort if we are going to have a revolutionary victory over Capitalism and Racism.

S. E. Anderson
Native Brooklynite Veteran activist/educator and author of "The Black Holocaust for Beginners".
Posted by Black Educator at 8:26 AM

great blog! thank you for your efforts and your analysis. just so you know im writing from a los angeles view of things. i respectfully disagree with your take on immigration. poor and working class black folks have been disportionately impacted by illegal immigration. this a material fact. undocumented workers have displaced black workers, pushed us out of our communities, overwhelmed our health care systems, and created overcrowded schools.

moreover, illegal immigrants are not sitting around talking about building a movement with us. many of them, especially latinos, are anti black. they are. here to replace us. they are not socialists; they are not interested in a "class analysis," they are here to work. period. should we address bourgeois downsizing, outsourcing, wage busting, etc.? yes. should we address us foreign policy. yes. should we critique globalization. yes, but simply piling immigration issues on top of the ongoing oppression and denigration of black CITIZENS is not, in my opinion, the way forward.