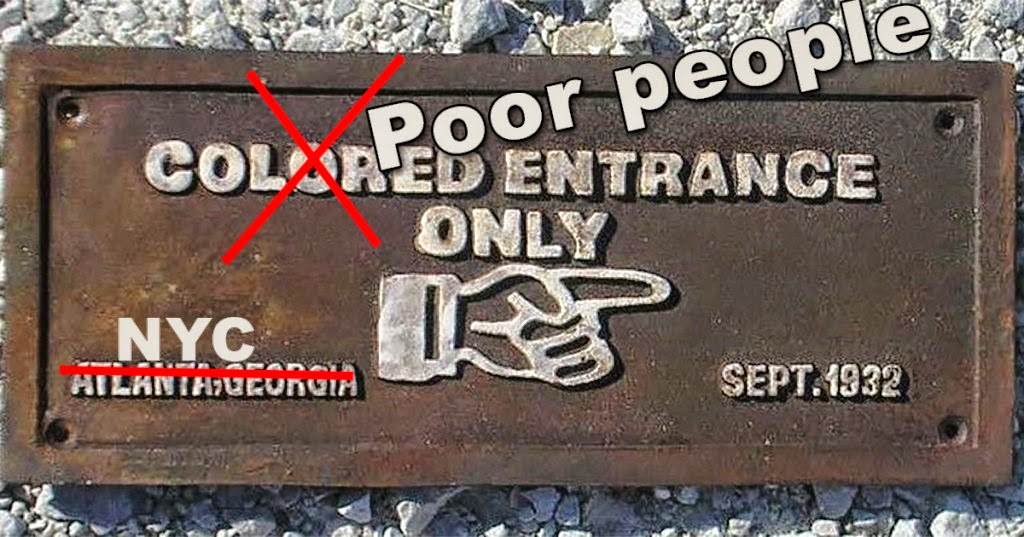 PoorDoor Apartheid…
An entrance to racism Now!
One door or… no home! 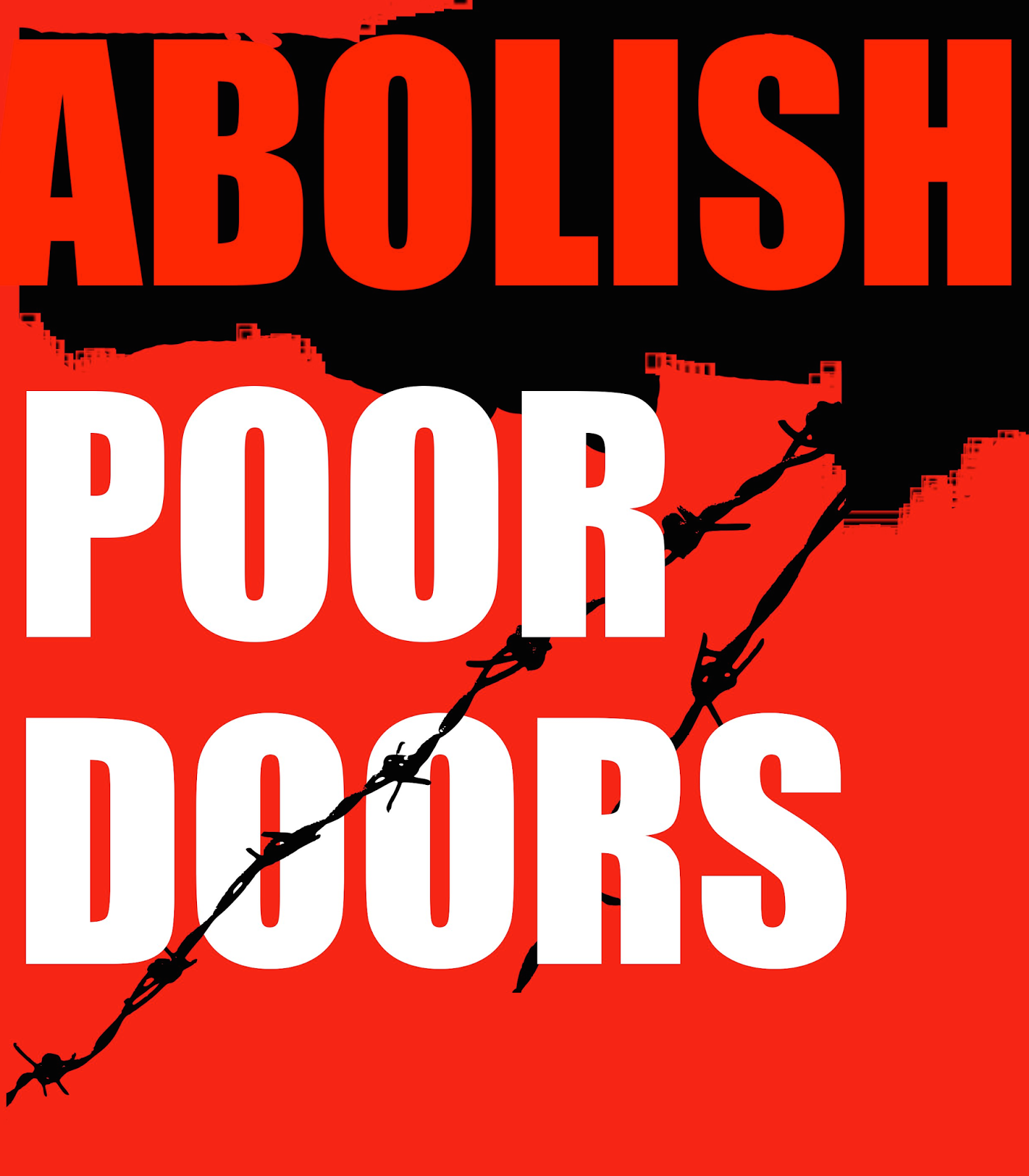 This is discrimination at it’s finest.


Poor Doors Are Necessary to Placate the Nice Rich Developers

Extell's project at One Riverside Park, looking at the entrance for market-rate tenants. Low-income tenants will be forced to enter on 62nd Street. (Extell)
New Yorkers rely on rich people. When we need a nice public park, rich people build it. When we need an affordable place to live, rich people build it. Shouldn't these rich people get something in return for their generosity? (If we tax them more they'll run away, and we won't have any more nice parks or cheap apartments.) Don't rich people deserve a public park penthouse or a separate entrance to their apartment for all their trouble? A report on Poor Doors in today's Times reveals just how resigned advocates and average New Yorkers are to this reasoning. "There are trade-offs," a rep from the National Housing Conference tells the paper. "It's really important that there's no discrimination, but there's a balance between what we can do and should do."
We also hear from a low-income resident of the Edge in Williamsburg: "Living here is a privilege. Over there you have powerful people. Over here you have low-income people. I'm fine with that."
But the developers who build these apartment complexes are getting a privilege too: tax breaks. Mayor Bloomberg awarded roughly $3 billion a year in tax breaks to developers, and his projects are now coming to fruition.
As a City Council member in 2009, Mayor de Blasio voted in favor of legislation that allows developers to build affordable housing units away from market-rate units and still receive the valuable 421a tax credits from the city. His explanation for his vote is "it was not evident at the time the nuances of where the doors would be."
De Blasio now opposes Poor Doors as part of his affordable housing plan, and two City Council members have drafted legislation to ban them and curb other forms of discrimination that prevent rent-controlled tenants from using amenities paid for in part by their tax dollars.
Developers despise affordable-housing tenants (one broker put it this way: "The sponsor doesn't want the tenant to have access to additional luxury services. His goal is to get him out of the apartment"). They eat into their profit. If there's no profit, what's the point?
"We wouldn't be able to do affordable," Gary Barnett, the founder and president of Extell Development Company, one of the largest development firms in New York, tells the Times about mixing units. "It wouldn't make any sense."
It goes unmentioned in the story, but Extell and Barnett somehow found a way to afford at least $400,000 in campaign donations to Governor Cuomo and state Democrats since 2012. Last summer, after shell companies for Extell donated $100,000, the developer received $35 million in tax breaks to build ONE57, the luxury high rise that will literally blot out the sun over Central Park. When Cuomo signed the tax breaks into law, Barnett chipped in another $100,000.
Emails from Extell describing how to legally skirt campaign finance law and heap donations on Cuomo for his birthday were uncovered by the governor's special commission to root out corruption. An investigation by the Times revealed that all references to Cuomo and Extell were erased from the commission's report at the governor's behest.
Extell also donated $18,000 to Mayor de Blasio's campaign, part of the nearly $800,000 he received from real estate interests.
"It will please big developers while offering a sprinkling of housing," Tom Angotti, a professor of urban affairs and planning at Hunter College and the Graduate Center, said of de Blasio's affordable housing plan in a story Gothamist ran last month. "It's no different than Bloomberg's plan to upzone wide areas for high-rise development and then get a little bit of affordable housing to win over the community."

Posted by Black Educator at 7:56 AM