"Putting Africa Into the Computer"
Brotha Kwabena Boahen is a brilliant young African scientist who is conscious of the possibilities of the uniquely "African" contributions to contemporary science and technology. One of the key components of this "Africanity" is its nonlinear nature... its embracing of complexity within collectivity... using networks over rigidity in processing and informing. Watch this video to the very end to get an understanding of where Boahen is coming from... and where his ideas can go- IF we bring African traditional cognition into the 21st Century science & tech. Brotha Boahen's very last example of infusing "Africa" into Western technology and culture really helps to clarify where he's coming from... and how Africans and our descendants must move forward for not only our survival and development, but also for the survival and development of Planet Earth.-- Sam Anderson

Kwabena Boahen: Making a computer that works like the brain 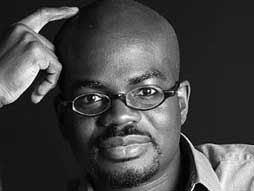 Why you should listen to him:

Kwabena Boahen is the principal investigator at the Brains in Silicon lab at Stanford. He writes of himself:

Being a scientist at heart, I want to understand how cognition arises from neuronal properties. Being an engineer by training, I am using silicon integrated circuits to emulate the way neurons compute, linking the seemingly disparate fields of electronics and computer science with neurobiology and medicine.

My group's contributions to the field of neuromorphic engineering include a silicon retina that could be used to give the blind sight and a self-organizing chip that emulates the way the developing brain wires itself up. Our work is widely recognized, with over sixty publications, including a cover story in the May 2005 issue of Scientific American.

My current research interest is building a simulation platform that will enable the cortex's inner workings to be modeled in detail. While progress has been made linking neuronal properties to brain rhythms, the task of scaling up these models to link neuronal properties to cognition still remains. Making the supercomputer-performance required affordable is the goal of our Neurogrid project. It is at the vanguard of a profound shift in computing, away from the sequential, step-by-step Von Neumann machine towards a parallel, interconnected architecture more like the brain.

Posted by Black Educator at 8:53 AM