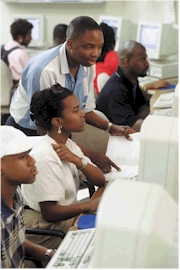 Strongly Encouraged to NOT Apply

Teachers Unite: How have the demographics of New York City's public school population, among teachers and students, changed since you've been involved in education?

Sam Anderson: Over the past 40 years New York City's public schools have gone from being comprised of predominantly white students to one that is now predominantly Black, Latino and Asian students.

However, when we look at the racial breakdown of the teaching and administrative staff, they are still overwhelmingly white to the point that nearly 80% of the teachers are white. All we have to do is look at the Department of Education's own data. More specifically, when we look at the sixteen year record of the racial breakdown of new hires, we see the re-enforcement of white teacher dominance clearly built into the DOE's personnel structure. Below are the data from the DOE about new hires (this was not easy to come by. But thanks to the persistent work of an Amsterdam News journalist, it is now in the public light).

Today's DOE new hires are more skewed towards white teachers than 10 years ago! This is clearly a reflection of the mindset of the top DOE officials who surround themselves in Tweed with white professionals and Black & Latino supportive staff (from security to low-mid level administrative staff). In addition, this high level staff is dominated by non-educators... from Klein on down to the mid-level corporate-like structures overseeing the actual nuts and bolts of the schooling process.

TU: How does the racial makeup of the teacher population impact on the education of children of color?

SA: There has been numerous studies and books written about the importance of the racial and nationality makeup of the teachers to the transference of the desire to learn as well as the quality of teaching and learning that will go on in a school. It is the normalcy of racism that we are trying to neutralize as well as, therefore, the normalcy of internalizing self-hating racist ideas about ones self. Well-trained teachers of color working with children of color with a curriculum that also includes their culture, their people's contribution to the development of the world have proven that they can boost the intellectual quality of children of color.

There is, within this, the importance of a teacher to understand the verbal and visual (body) language of a child. Way too often, white teachers don't have a clue about this or grossly mis-interpret stuff in the negative... and wind up further alienating the child of color from the educational experience.

In addition, Black/Latino parents will be more receptive to and open to critical suggestions from teachers of color than a white teacher (who is seen as just another social worker trying to pry into and define their family life).

TU: What do you view as the most significant reasons for the falling numbers of teachers of color in NYC public schools?

SA: The current Bloomberg-Klein approach to teacher recruitment is to hire "far and white." That is, go outside of New York City and emphasize recruiting white teachers over Black/Latino teachers. They have spent tens of millions of dollars making teaching in NYC schools a palatable and hip thing for white folks to do.

We know this to be the case by just looking at the stats of new hires during Bloomberg's reign: from 61% up to 65% for white new hires while Black new hires went from 20.1% down to 14.1%... while the student population increased to be well over 85% students of color! This can only be called negative affirmative action (or affirmative action for mainly white women...who constitute the bulk of new hires).

I have been suggesting that the DOE REVERSE their recruitment practices and focus on a ten-year plan to bring Black/Latino/Asian teachers up to match the racial demographics of the city's school children. By reversal I mean setting up a structure that encourages Black/Latino community folk to return to school and trains them to become teachers. Have tuition free programs within the CUNY-SUNY system where residents of NYC can go through college and become teachers. Take that $50 million plus teacher recruitment money and set up a highly publicized campaign to get men and women from our 250 neighborhoods to join this new army of teachers. Incentives, besides free tuition can be that the DOE pay 50% of the rent while going to college and 100% of the rent for the first three years of teaching; free tuition for the children of the teachers as long as they are teaching in NYC schools.

The private teaching institutions- Bank St., Columbia University’s Teachers College, New York University, etc. would be encouraged to join this effort through the city fully subsidizing 50-100 students enrolled in the Community Teachers Program if they are accepted to these institutions.

TU: Are there, or has there ever been, support systems for recruiting, supporting and retaining teachers of color?

SA: There are currently no overt support systems for supporting and retaining teachers of color. If the DOE says they do have something, then it should be a blatant embarrassment for them when we look at their combined Black new hire and RETENTION records: There is a DIMINISHING presence of Black/Latino teachers in NYC schools.

Klein has used a lame excuse as to why there are so few Black/Latino new hires: they are not interested in teaching and can get a better salary and endure less stress in the corporate world. Obviously, this "excuse" can be used upon potential white teachers also. But the current recruitment campaign lures young white teachers with enticing incentives and slick ads.

TU: What else do you think needs to happen for there to be more teachers of color in our system?

SA: This transformation cannot happen under mayoral control of the city’s schools... and especially under the current Bloomberg-Klein education fiefdom. They will stall and stall ‘til term limits move Bloomberg and his administration out in 2008-09. Hence, what I am proposing is something to fight for under a new mayor AND within the fight to stop the permanent setup of mayoral control over public education.
Posted by Black Educator at 10:49 AM

This is really interesting. Has anyone looked into the introduction of the New York City Teaching fellows? They tend to be predominately white. I have heard from a good friend whose fulbright scholar daughter was rejected that she felt that the screening process was biased.

Black teachers are catching HELL under this regime.